It is almost Halloween and as part of our “Halloweek”, Paranormal Research York are investigating this 14th century building in the heart of York once again!

Bedern Hall, when we last investigated, intrigued us with it’s activity, unexplained noises and the internal heavy door latch trying to open on its own during a vigil, as well as lots of activity with the planchette and technical equipment…it is now time to return to this quaint hall with its dark and at times, tearful past.

Bedern Hall has had many uses in it’s long and dignified past – once a dining hall for the priest’s college from the 1390’s until the middle of the 17th century, when, as the area around decayed into slums, Bedern Hall was dragged down with it. However, the Hall was always a focal point and people say that the cries and screams of those who died in the area can still be heard in and around the Hall.

This is an interactive event and you will get to try the activities for yourselves – you will be involved in the investigation as much as you dare be! 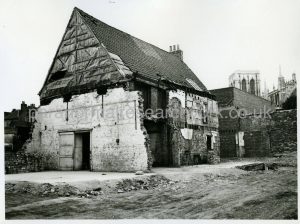 Ghostly sightings On previous investigations, feint cries, hand holding and hair being touched and the overwhelming sense of darker emotions gathered around us and although we managed to communicate with some of the many spirits here, we weren’t able to connect with them all.  We met, but didn’t connect with a Hall Keeper – a large and imposing spirit, who in life was a deaf-mute. He was employed to guard the door when meetings were taking place, his lack of communication was perfect for that job. He was curious about our presence and that we could see him, maybe, he will connect with us this time?  The spirits of children were felt by many guests, from hand holding to the touching of hair.  Spirits interacted with us during spirit board sessions and one made his presence known through the SLS camera.

The history The area around the Hall housed immigrants from Ireland after the great potato famine.  Houses were crammed, it was overcrowded and hygiene unspeakable. Bedern was full of drunkenness’ and disease, a crime ridden red light district where decent people feared to tread. Bedern tenants fell into insanity from the pressure of living in the slum, the area was so violent with serious crimes, those who passed by the covered passageway to Bedern from Goodramgate knew to stay well clear…and so the Bedern slums had arrived. 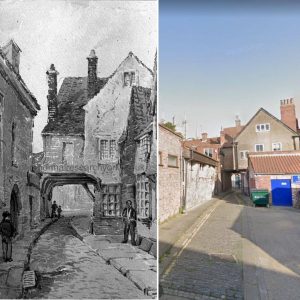 The Hall itself is not short of scandalous stories…the intense cloistered life of the vicars was taking its toll and several had started to stray. But what of the children of Bedern? One story is of a George Pymm, who allegedly ran a school and workhouse near Bedern for poor and orphaned children. Legend says he neglected them so badly they died in large numbers and another story says he buried and stored children in the cupboards within the school. Numerous stories from Bedern and around the Hall are of children’s shadows seen on walls, invisible hands touching unsuspecting passers by and the sounds of screams and giggles.

***This is an interactive event and you will get to try the equipment for yourselves – you will be involved in the activities and investigation as much as you dare to be!***

What to expect on a PRY night  On our ghost hunts you can use your senses to feel if someone or something is with you. PRY help you to explore your senses to investigate the paranormal using traditional and modern communication techniques and guest participation is encouraged!  Whether you are a beginner or a seasoned investigator, this event will leave you wanting more.  We have been awarded Visit England’s ‘Good to Go’ kitemark and we are respectful of people’s preferences regarding mask wearing during our events.

Please bring your own hot drinks.  We will provide a range of individually wrapped snacks and bottled water.

Monk Bar Car Park is only a 5 min walk away. 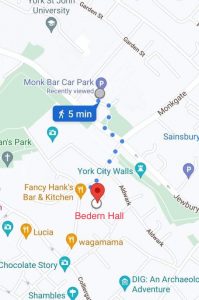 ** Tickets £35pp (a £15 deposit will secure your place, with the remainder due 7 days before the event) Tickets are not issued – we have your details so just come along on the night!**

* Book direct through the website or
* Call Clare or Kevin 07534402620
* email paranormalresearchyork@hotmail.com
Terms and Conditions
Please read our terms and conditions on the website.  Please note, we do not issues refunds unless the event is cancelled by us or the venue.

There are no reviews yet.