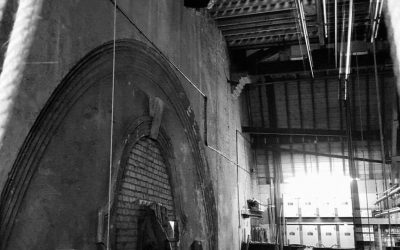 Originally we had planned to do a ghost hunt on Friday 13th March, however, due to demand, we added another ghost hunt on 12th March that ran into Friday 13th… and were we disappointed with our decision? Absolutely not! What an evening! What a building! It took us by surprise that The Grand Opera House had never before been investigated and it did not fail to deliver.

Before the event began, we had a walk around to familiarise ourselves with the building and to take some photographs in the silence after the Ghost Stories show that evening. Clare took some pictures from one of the boxes and caught some strange mists in the Dress Circle area.

We met our guests in the downstairs bar area in this historic building. Some had attended the show earlier in the evening and joined us for an extended night out. Dan was our Usher for the evening and what a treat it turned out to be for him! More on that later…

We started off in The Ken Dodd Bar and as this was advertised as an interactive event, we immediately invited the guests to join in our Human Pendulum activity. This is where we ask spirits to gently push the guest (pendulum).  They were a little apprehensive at first, which is to be expected, but soon joined in and the spirits did not fail to make themselves known. An Usher came through who said his initials were D.E and he worked here in the 1960’s and was enjoying being able to chat to us! We tried a different guest and the same spirit jumped back in, he was obviously enjoying his chance to chat. We changed the pendulum again and this time the spirit was a female performer from the time when the theatre first opened. She said her and her husband both used to work in the theatre and she danced. She did say she was stuck and would like some help to go into the light, which Kevin provided. This is something we can do at events and it seems that spirits do appreciate this. During the Human Pendulum there were noises in the storage area, also lots of people got affected by spirit around the circle, from being pushed to feeling hot or cold. Francesco, our new team member, also felt hot around his head and neck whilst inside the circle and Sam felt dizzy and light headed throughout.

We then went to the Dress Circle, Sam felt there were spirits wanting to communicate with us, and he was right!. Guests were invited to use the equipment to see what spirits were around so Francesco went with Clare to get SLS camera and at this point they fitted 8 new batteries. On way back to group they were walking with the SLS camera running and captured a small stick figure and a bigger figure appeared next to it. The figures stayed there for a good 30 seconds before disappearing.

During the SLS camera activity in the Dress Circle, one of our guests sensed a cold breeze beside her, then the SLS camera picked what appeared to be a small child. Sam then got name “Freddie” who died falling off the balcony. All this information was confirmed to be correct by Dan who had not given us any information regarding names or events that had occurred in the theatre. Using the SLS camera, Freddie appeared to talk to one of our guests, we asked Freddie to raise his arm and he did. When his name was mentioned for the first time, an orb flew across the screen. When Freddie left, another figure appeared and one of our guests called out “it’s someone else” and at this point a red orb flew across the screen. What a fantastic piece of evidence for us!

We then decided to do a call out in the Dress Circle towards the stage and stalls area. We had taps in direct response to our questions from the left hand side of stage. The curtains covering the orchestra pit seemed to be moving. A guest also saw a shadow figure walk in orchestra pit from the left to the right hand side of the stage. Indeed a few guests and team members reported seeing shadow figures in the stalls area and in the boxes at the side.

One guest said her feet were feeling really heavy “like lead”. Sam explained that sometimes spirits can make you feel how they are feeling and this spirit may have had trouble walking or problems with their legs. A figure then appeared on the SLS camera in the dress circle, two thirds across. The figure seemed in distress. Sam realised this was the same spirit that had been affecting the woman. Sam also said he felt the spirit had fallen and broken his back.

During the vigil in the Dress Circle, Sam showed Dan a picture indicating where he felt spirits were in the main auditorium. Sam had taken this on 27th January 2020, before he had visited the theatre for the ghost hunt. Dan confirmed that all the information on the photograph was correct, as this is where sightings had been reported. Dan looked very surprised and also took a picture of our picture on his phone – we don’t think he could believe it.

We then moved upstairs to the top of the building to a room which doubled as our hub – this is an area where staff have reported hearing screams coming from a small room via a doorway attached to this room. Kevin and Sam lead the planchette activity and again spirit did not fail to make themselves known.

The planchette activity was opened and closed by Kevin. Francesco captured a small figure on the SLS on an empty chair, could this have been the boy Freddie, following us upstairs? Again there was a larger figure with the small one.

During this session we connected to an ex manager of the Grand Opera House who did not like people in or around his office! He also confirmed he still did his job as manager! Could he be responsible for the growling sounds that are heard here? When asked for confirmation he was the manager the K2 meter went off and touched the red light.  We asked if he liked Dan and he said “yes”, he would not fire him! He was aged 42 when he was killed in 1931. He also let us know he did not like to be asked personal questions. He told us he was pushed off the balcony by someone who was an employee due to a love triangle but he stopped answering questions about this.

During this activity, three guests were using the crystal pendulums and their answers were matching up to the planchette response and this is where Dan was asked to do a lone vigil in the room through the adjoining door. Although a little apprehensive, Dan agreed as long as Kevin accompanied him.

In the room the atmosphere was heavy and although it was at the back of the small room the spirit was growing in confidence. Dan started to feel chilled and we heard a noise from the end of the room. Dan felt a cold area on his hand, as if his hand was being held. With encouragement Dan entered the again on his own with a voice-recorder. Watch out for an update from this in the near future when we have examined the recording.

And so the night ended. 2 1/2 hours of amazing spirit activity. We have received some fantastic feedback from our guests and we look forward to seeing you all on another PRY ghost hunt!