Tonight we hosted a private event for a group who had never been on a ghost hunt and to be honest, some were scared before they arrived. Not knowing what to expect and a devout sceptic who was sure we would be “phoney” meant we faced some interesting conundrums as to how to ensure they enjoyed the night.

We did our usual protection prayer, much to the relief of our guests. This is something we do at the beginning and end of every event to ensure we are as safe as we can be whilst we communicate with a range of spirits.

Jacob’s Well has a host of spirits. Built in the late 15th century, it is steeped in local history and add to that the spirit visitors from nearby buildings that we encounter on a regular basis, you have the potential for a highly active night.

Our sceptic was the first to volunteer for the Human Pendulum and whilst the energy was gentle, she did experience movement that she was unable to explain…a great start!  Equally interesting was the fact that that spirit talking to our sceptic was a cook, as was our sceptic!  As the guests rotated in the pendulum, the activity become stronger, with one of the guests suddenly recoiling after seeing a spirit show its head around the front door, just for a second. This has happened a few times here before, although he never actually engages with us.  Could it have been the spirit of the Quaker that was seen on this night by a team member and indeed on previous investigations?  Maybe one day we will get to speak to him. 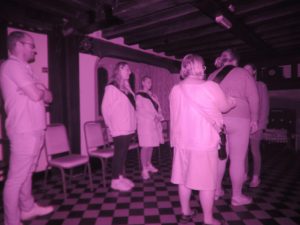 We did pass a little 5 year old boy home to be reunited with parents and the movements in the pendulum were not slight, with one of the guests feeling she was pushed on her calf muscle to move her. When we stopped the pendulum we got a flurry of activity around the front door with the Mel Meter, K2’s and temperature sensors all reacting to some energy that appeared to be of child height. On the back of reuniting the boy with his parents, we re-opened the Human Pendulum again and we had 7 children who wanted to go home. One stalled on leaving, until we worked out the child was with a sibling, and then happily went home when they could do it together.

Who, or what did we capture during the Human Pendulum? 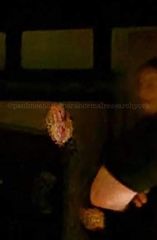 Our team got some fantastic unexplainable photographs during the night too. We shared these with the guests who were excited tinged with apprehension as to what was happening around them.  The following photos show the original light, then brightened up.

As this a not a full blown event, because of the wishes of our guests, we did do some demonstrations, particularly around Mirror Scrying. Our guests watched as the faces of our team physically changed in the antique mirror. This gave our guests the belief that it was safe and they took turns to take part, each having a very different experience, including one whose whole lower face disappeared as if wearing a mask and another who appeared to have her eyes sewn shut.

We did a Spirit Box session and that went really well with some intelligent responses to the questions asked, this did spook our guests a little, however, once they realised it was safe they were happy to be part of the circle.  We had a some intelligent responses to questions, including two dominant spirits called Andy and Richard, who said they were not connected to the building.  Who are they? 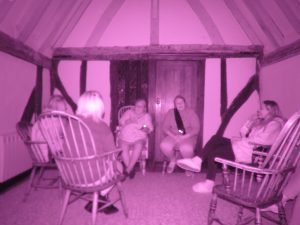 The parabolic ear was used by the guests and they could hear unexplained noises, including children’s laughter from inside the store room and as we opened the door into the garden a voice said “we are all dead”. There is a graveyard there! 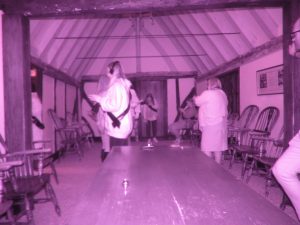 At the end of the night, there was an feeling of “we survived” from our guests, but they did say they really enjoyed it and it definitely was not some kind of theatrical experience, which was what they were expecting. The best feedback came from the sceptic who said “This was definitely not phoney, and I am coming back again!”  We couldn’t ask for anything more.