Blog
Ghost Hunts
Investigations
Venues
What We Do

Wharram Percy, a village lost in time – A Paranormal Investigation

Wharram Percy is a medieval village lost to the ravages of farming, disease and eviction.  People have settled here since the 9th or 10th centuries and a recognisable village evolved between the 10th-12th centuries.  Flourishing in the 13th century, around 200 men, women and children lived, farmed and died here.  Population losses suffered during the mid-14th century due to the Black Death and the village finally declined soon after 1500 when the inhabitants moved away due to the area being converted into pasture for sheep farming.  The last four families were evicted in 1488 and 1506. 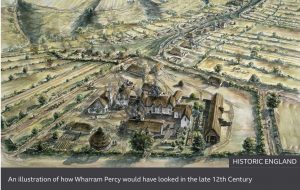 The investigation As we walked through the earthwork remains of around 40 houses, the village came to life.  We heard the constant low mumble of talking and we had the sense we were being watched with great interest.  The overwhelming feeling among the medieval settlement was that of community and hard work but with the constant fear of attack – and the spirits here seemed curious and wary of our motives.

We turned on the spirit box and the voices came through fast – men and women, speaking partly in English, partly in an unfamiliar language. This is a place with little radio or internet reception, so is a great place to use the spirit box.  As we started to walk to the boundary of the village, we heard the words (apologies for the spelling!) “fiaga murden”, “fianken” and “vanking durch”.  We acknowledged spirit and continued to walk towards the fence where we had the overwhelming feeling that we had been left to continue on our own.  The spirits were not following us, instead they shouted three times, each time getting louder “flah strommer”… “flah strommer”…”FLAH STROMMER!”    The Anglo-Saxon word Flah means wickedness or treachery.  What were they warning us about?  As paranormal investigators, this didn’t stop us and we walked on to investigate further. There was an eerie feeling of emptiness, like a barren field with no soul and no personality, an unloved place.

Here we encountered some lost souls communicating with Clare through the spirit box and Kevin through more traditional means. There was a precise linear measurement that we were told, a place that remained across generations, but it was very precise.

Kevin was able to help those few souls there cross the spiritual divide and get away from their earthly prison. It was then that the atmosphere changed.

Making our way back from the boundary, spirit again said “Samin” and then in modern English “we people”, “we help”.  Samin in Anglo-Saxon means “Together”.  Were the spirits trying to help us now?  As we continued to walk towards the church, we were led around the edge of the boundary and given directions to the area where a man had died.  We were told to “Stop”.  Kevin connected with an older man who been led to the corner of the village on a dark and stormy night. His last recollection after being hit on the head and left to die was raindrops getting in his eyes.  This was also captured on the spirit box and Kevin was left to pass this spirit over.

Heading down into the churchyard and more recent areas, the whole atmosphere changed again.  The voices on the sprit box ceased, the area quietened and we wondered what was going to happen.  We headed towards the Church of St Martin and the churchyard, a medieval ruin, where nearly 700 medieval skeletons were excavated. Here we took some photographs and have captured what appears to be a shape moving inside the Church.  Could it be the Reverend still working? 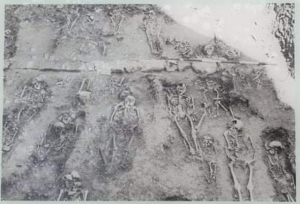 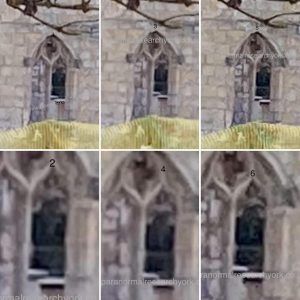 Next we headed to the last vicarage built in Wharram Percy.   Walking around the boundary, we distinctly felt we were not welcome.  Clare stood on what would have been the doorstep and asked if she could enter.  Using the spirit box, we waited.  We asked again and were told “move”.  So we moved forward, into what would have been the hallway.  We did a human pendulum and connected with we believe the Reverend.  He confirmed it was his home and the second room was his favourite.

We left the area and moved towards the layout of the old farmhouse, built in 1807.  Prior to this, there was a farmhouse built before 1674.   Kevin stood back to allow Clare to walk the area using the spirit box.  Immediately upon entering, Clare said “hello, can I come in?” and spirit replied “‘appen!”  We connected with what appeared to be the farmer and his wife.  The feeling within this area was happiness, jollity and hospitality.  Within this area we could smell something nasty and as Clare said to Kevin “oh that smells bad, what is it?” the spirit box replied “the barn”.  Standing in what we believed to be the kitchen area we asked if it was so, and a female voice replied “yes”.  Clare walked towards Kevin as she had the sense spirit wanted to connect with him.  She asked spirit if they wanted to talk to Kevin and the spirit box replied “yes”.  Clare asked if they knew who Kevin was and it replied “Kevin”.  So Clare walked over to Kevin and shook his hand.  Kevin acknowledged spirit saying Hello and spirit replied “hello” and “love you”.

The only buildings left standing are the farm cottages, built in 1851 to house agricultural labourers and the church ruins. However, there are outlines of the buildings unearthed over the last 70 years and are full of residual energies. The meetings in the barns, the stench of the cattle houses and the mystery of the vicarage all piqued our interest and will need further research and investigation. 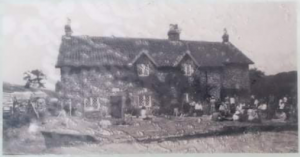 As night was drawing in, we decided to leave the area.  The atmosphere had changed.  We sensed a darkness descending upon the village and we decided to leave.  A foreboding had arrived that we didn’t want to engage with on this visit, and so we made our way back, to return another time.

The Dead Arising?  During excavations of the skeletal remains, archaeologists discovered the corpses were burnt and mutilated before burial.  Was this the villagers attempt to prevent the dead arising from their graves and harming the living?  Or did the villagers practice cannibalism?

Knife marks were found on 137 bones dating between the 11th and 14th centuries.  Some bodies had been decapitated and dismembered.  Knife marks were mostly in the head and neck area and bones had been deliberately broken after death.  The skeletons affected were not just of men and women, but children too.

So were the remains cannibalised by starving villagers?  Analysis of teeth revealed the dead grew up near to where they were buried, dispelling a suggestion they were outsiders.  So what happened here?

Because there was no evidence of knife marks clustering around major muscle attachments or large joints, this theory was ruled out.  So the idea of burning corpses and breaking bones to stop them walking from their graves seems to fit the evidence best.  Evidence like this, shows us the dark and graphic side of medieval beliefs.

Overall, Wharram Percy was an intriguing place for a paranormal investigation, with its prehistoric paths and ghost buildings and array or spirits. It provides us with more questions than answers and we will return, better equipped for a fuller investigation. Watch this space!