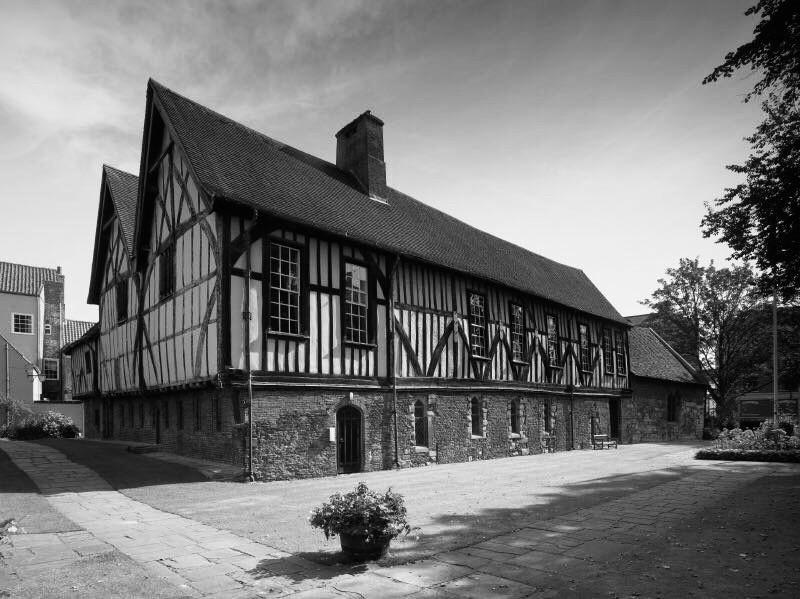 The build up to first ghost hunting event at The Merchant Adventurers’ Hall, York should have been enough to let us know this was going to be a good investigation, in truth it was a great investigation. The Hall dates back to 1357 and is still used today for its original purpose; so the history here is very rich indeed! This is an ideal location as it is in the heart of the city and because of its position in the centre of the grounds, there is very little noise pollution and the Hall is eerily quiet indeed.

We gathered in the Chapel area for our first activity of the evening, The Human Pendulum. We like this as it puts the emphasis on the guests and as they get to ask the questions they know quite quickly that nothing is going to be faked.

During the first segment a guest picked up a woman from the 1600’s, it was felt she was emotional and after a few questions it was clear she wanted to return home after being somewhat trapped here for the last 400 years. Our Medium was able to this. Why would we do this during an investigation? There are a number of reasons, firstly we respect spirit and help if we can and secondly, once you help one it is often the case that more come forward, so it actually helps with the investigation.

During the session we asked if the spirit of the male who came through could move the coins on our trigger object board. He said he could! More on this later!

From here we assembled by the fireplaces in the Undercroft for a crystal dowsing session.  Some of the guests were using crystals for the first time and we helped them through this. This is a chance for everyone to have their own proof and not just watch a team member give a demonstration. One of the guests got a male teenager who was desperate to go home and so as a group we sent him.Everyone felt the icy coldness of the atmosphere after this happened.

About this time we were hearing noises and knocks, we checked with the tech guys who said it wasn’t them, but there were lots of noises starting to happen. The REM pod was active during this session and guests said could hear whispers around them.  During the session, there were noises coming from the chapel area which sounded like a lady calling out.  One guest said she could hear music aswell.  Guests also reported they could see lights and shadows moving around the Hall.

It was now time to bring the “tech” out and we used The Portal in the chapel. It was slow to start but started to focus on one of the male guests and asked about his leather wristbands, which were PVC but would have possibly looked like leather to a spirit. The conversation, with direct responses took a very distinct Viking twist. The male guest is Vikingesque in appearance and attracted this spirit, it also brought a reference to a girl called Megan said she was hurt by nurses. (Although The undercroft is called a hospital, it was an Almshouse providing beds, meals, spiritual care and much later some basic medical treatments. Nurses would not have been downstairs normally, further investigation is needed! Spirit also gave some other names – Nathan, Samuel and Ella were mentioned.  We received direct responses to questions, one spirit answering he was Saxon.  When we asked how many people were trying to communicate with us, we got a direct response of “11”.  Spirit also identified three guests by calling their name and another quest was identified by direct questions.

After the break we focused on the main hall. At the table we used the writing planchette with some interesting results. There were some distinct twists and turns from the planchette to give us initials. The initials were in direct response to who was hanged. We weren’t sure if it was the judge’s or the victim’s initials and the initials caused some interesting debate as to what they were. Also the planchette was trying to draw in direct response to our questions. Was is an eagle, a swan or was it a Viking boat? We were unsure.

We tried a “yes” and “no” response session and a man proclaiming to be a Beadle type person (The Beadle post didn’t exist when he said he was with the Hall, yes it really did go that far back).

One guest asked if she could try using the planchette alone, she had the spirit through of a relative who was interacting with her, and also drawing with the planchette.

We checked the coins trigger board, there was CCTV footage on the board and we need to review this, however, when we checked an additional, water damaged coin had been added to the collection. Did they think we were having a collection.

Now it was tech time again! This time we brought out the SLS camera (stickman) with some amazing results. Two guests were filmed using the SLS camera, and on both occasions a figure appeared beside them, interacting with them by raising their arm upon request.

The guest feedback was brilliant and they all would welcome the chance to join us again either here or at other venues. We could write a book, or at least a chapter or two on this event alone.

Because of the build-up to this ghost hunt, we had already decided to do another event here. We cannot wait to come back and pick up where we left off.